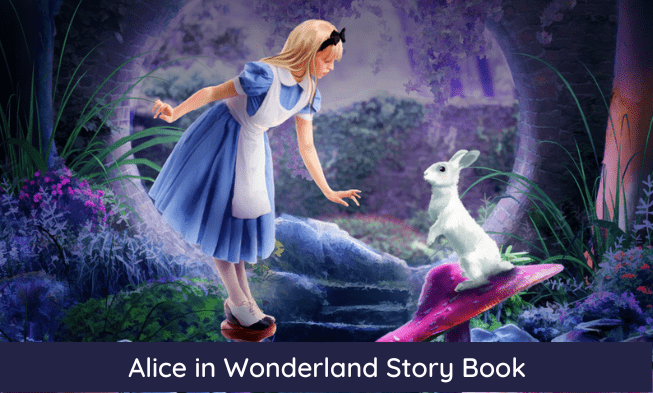 On a sunny day Alice and her sister went out on a walk in the fields and as her sister was reading a book, Alice got very bored. Suddenly she saw a white bunny that was in a hurry. She was so curious and went after the bunny.

The bunny went through a hole in a tree trunk and Alice followed him. Suddenly she found herself falling in a very deep well. Finally, she landed and saw a long corridor in front of her and started to walk where she saw many locked doors and the bunny disappeared. She saw a little golden key on a table that fitted a small door being the curtain.

She opened the door and saw a beautiful forest, but she couldn’t fit through the door. Alice notices a bottle in the table next to the key; she took the bottle and drank it. As she drank the potion she began to shrink. She got small and went through the door, where she saw the bunny again. The bunny asked her to bring his gloves and hand fan from his house.

Alice went to the bunny’s house and found his gloves, hand fan and also saw a bottle of potion on the table. She thought the potion would bring her to normal size and she drank it. Suddenly she became so big, the animals around the house started to throw stones inside the house. The stones thrown turned into small cakes. When Alice ate those cakes she started to shrink and got out of the house. But, she was upset as she was so small.

Alice started to walk on the path where she saw a cat with a big smile; she asked the cat what’s his name and where this path leads. The cat said it’s a Cheshire cat and the path leads to the Man Hatter and March Hare. After the little chat, the Cheshire cat disappeared slowly starting from his tail, only its face remained.

Alice found the March Hare who was having tea with the Mad Hatter under a tree. She also saw a Dormouse sleeping in between them. When they saw Alice coming they opposed saying that there is no space available. But Alice said there was plenty of room. Man Hatter said if she wants to stay she has to answer a riddle. He asked Alice “Why the crow looks like the desk?” She asked him “Why do you think?” He replied, “I don’t know.” Alice got upset with their stupid jokes and went away.

Alice continued to walk, on the way she saw a tree with a door. She found a golden key which opened the door to a beautiful garden. Alice was very surprised to see the guards of the Queen of the Hearts painting all the white roses to red as their queen doesn’t like white roses and all the guards looked like playing cards.

Right at that moment, the Queen came to the garden and invited Alice to play croquet. Alice was shocked to see hedgehogs used as balls and flamingos were used as crocodile  mullets in the game. Suddenly there was a fight between the players. The Queen got upset so she cancelled the croquet party and headed towards the court.

The trial was about a jack of hearts who had stolen a pie from the Queen’s kitchen. The king yelled from his seat “Call the first witness!” The first witness was Mad Hatter. When he started to talk, Alice suddenly started to grow. The rabbit called for Alice to take the witness stand. The queen of hearts asked Alice to tell everything that she knows. “I don’t know anything.” Alice answered. The queen yelled seriously “You don’t know, chop her head off.”

Alice got very upset and shouted. Suddenly the king, queen, and all the playing cards started to fly towards Alice and became a big whirlpool of cards.

Finally, with the leaves flying all around her, she found herself on the field again. Her sister called out Alice to wake up as she was in deep sleep. When Alice woke up she realized that everything was a dream. She said to herself that it was an amazing dream.