–for actions/states which started in the past and are still happening.
example:I have known him for three years. (I still know him.)

–for past actions whose results are connected to the present.
example:The baby has spilt the milk.(The floor is dirty.)

–to announce news, news, changes or events that affect the present.
example:He has lost all his money.

–for past actions whose time is not stated, or for recently completed actions.
example:He has travelled all over Turkey.
I have just finished my homework.

–with today,this morning/week etc., if these periods of time are not finished at the time of speaking.
example:He has written two letters this morning. (It is still morning)

–with adjectives in the superlative degree or expressions like: the only/first/second… etc.
example:This is the most expensive suit I’ve ever bought.
This is the third time Jack has visited Turkey.

Time expressions for the Present Perfect Simple: since, for, just, yet, already, how long, ever, never, etc.

The Present Perfect Progressive is used:

–to emphasise the duration of an action which started in the past and is still happening. The action may or may not be completed.
example:They have been studying English for five years.

–for actions that have been going on up to the recent past with obvious results in the present.
example:“Why is the road so slippery? -Because it has been raining”

–for actions which are temporary rather than permanent.
example:He has been working overtime this week as there is a lot of work to do at the office.

–to show anger, annoyance, irritation or to demand an explanation for a very recent action.
example:Who has been wearing my coat?
Why have you been crying?

Time expressions for the Present Progressive: how long, for, since, all day/morning,etc. 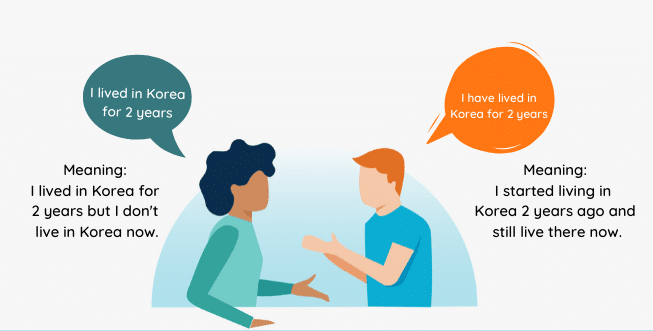 –for permanent situations.
example:She has lived in London all her life.
–to emphasise the result of an action.
example:I’ve called him three times this morning.
–for actions that are already finished.
example:Look at the car. Sam has washed it.

The Present Perfect Progressive is used:

–for temporary situations.
example:He has been staying with friends for two months.
–to emphasise the duration of an action.
example:I’ve been calling him since ten o’clock.
–for actions that may or may not be finished.
example:Sam has been washing the car for an hour.

–for past events which have a connection to the present.
(the exact time is not mentioned.)
example:I’ve found a new job.
–for events that began in the past but still happening in the present.
example:I have lived in Turkey for ten years. (I still live in Turkey.)
–with today,this morning/week, etc. if these periods of time are not finished at the time of speaking.
example:Tom has called me twice this morning. (The morning is not over yet.)

The Past Simple is used:

–for completed past events which are not connected to the present. (The exact time is mentioned.)
example:I found a new job three months ago.
–for events that took place for a certain period of time in the past but are over at the time of speaking.
example:Sam lived in Turkey for three years but now he lives in New York.
–with today,this morning/week etc. if these periods of time are finished.
example:Tom called me twice this morning. (The morning is over.)

Download Present Perfect Tense PDF that you can read anywhere.